Trail along the Maira 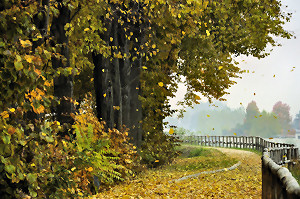 The Trail along the Maira is a tourist path promoted by the Compagnia del Buon Cammino and the eight municipalities along the Maira. The Compagnia del Buon Cammino is an association, established in 1996 and based in Cuneo, that unites municipalities, organizations, associations, businesses and private citizens devoted to promoting their territory from a tourist standpoint, thanks to environmental protection, the identity of the landscape and the socio-cultural heritage.
The itinerary can be enjoyed on foot, horseback or mountain bike, and has signage illustrating the route and the natural environment; it goes from Racconigi to Villar San Costanzo, touching the municipalities of Cavallerleone, Cavallermaggiore, Savigliano, Vottignasco, Villafalletto and Busca.
Along the section skirting Savigliano, the environment shows an alternative pattern of flora with respect to the crops grown in the surrounding land. There are still essentially uninterrupted wooded areas, albeit with a strictly linear development. Natural flora include riparian willow forests, with a prevalence of white willows, and the presence of white poplars, black poplars and locust trees, undergrowth with dense brambles and shrub such as elder, common dogwood, hawthorn and hazels, and isolated reserves of forest trees, with common oak and ash. As to fauna, there are numerous wild animals such as hedgehogs, moles, common rabbits, dormice, badgers, foxes, eastern grey squirrels and, at certain times of the year, eastern roe deer, driven towards the area by hunger and the presence of snow.
As to birdlife, there are numerous mallards, pheasants, turtledoves, swifts, buzzards, little owls and long-eared owls, hoopoes, herons, little egrets, green woodpeckers and great spotted woodpeckers, swallows, house martins, white wagtails, robins, nightingales, blackbirds, great tits, jays, magpies, carrion and hooded crows, starlings and sparrows.
This section of the river has historically been an integral part of the town's social and economic life. In addition to providing timber and gravel, until the 1960s the Maira was also a vital economic resource for a number of professional fishermen. Moreover, for the people of Savigliano it was also the main attraction for leisure and fun, as they could enjoying swimming and diving in the pools formed by the river.
Indeed, it is no accident that the men who lived in close symbiosis with the Maira have been etched into the popular mind. Even today, people remember Bartolomeo Racca, the last quarrier - sabiunè in the Piedmont dialect - of sand and gravel; Mario Torre, nicknamed Re Cit, and Francesco Burdisso, unforgettable fishermen and river people; and Mario Becchio, "the man of the colony", who lived for over 30 years without electricity or potable water in the rooms of the old Fascist heliotherapy camp built along the Maira in 1934 and finally torn down in the 1960s after it was seriously damaged by flooding.